Portfolio:
All PortraitureArchitectureSculptureDecorBooks
Home   ›   Portfolio   ›
Audi TT     ‹ Back to portfolio

In my various encounters with LEGO Master Builders and modelmakers, I've learned that sometimes the most impressive and interesting LEGO models are those that align with the basic LEGO element's form and function.

Rather than trying to "stretch" LEGO to do what you want by turning pieces upside down or finding rare bizzare shaped parts, if you work within the world of the basic LEGO brick, you can achieve fantastic and beautiful results. I adopted those principles when I built this Audi TT (and the contrasting Chevy Suburban, built together). 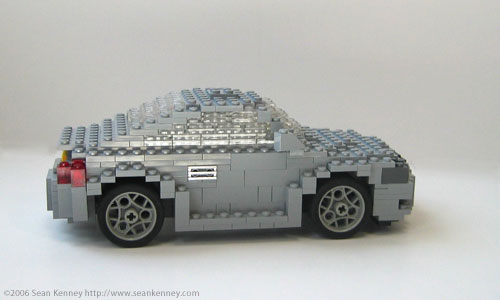 I'm very happy with the overall results, mostly because it shows how stepping LEGO pieces carefully can result in very subtle and familliar shapes, even in smaller models.

Commission a LEGO sculpture
About the studio
Sean Kenney is a renowned, award-winning artist who uses LEGO pieces to design and create contemporary sculpture, travelling exhibits, childrens books, and commercial products.
Contact us