Portfolio:
All PortraitureArchitectureSculptureDecorBooks
Home   ›   Portfolio   ›
LEGO Yankee Stadium in Time Out NY     ‹ Back to portfolio

This sculpture of Yankee Stadium is being built slowly over the course of several years with a gradeschool boy. When complete, it will be over 5 feet wide and contain about 40,000 LEGO elements.

Intrigued by Sean's New-York-themed LEGO creations, Time Out New York interviewed Sean about his upcoming Yankee Stadium project. The sculpture, currently underway, will be be completed in 2008. 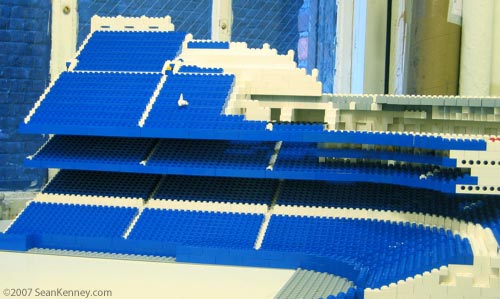 Gordon, a Manhattan gradeschooler, who prefers not to reveal his last name, chose to memorialize his favorite ballpark in his preferred medium, LEGO®. Last June, his father commissioned LEGO-certified professional Sean Kenney to oversee the construction of Gordon's own Yankee Stadium. Though Kenney doesn't normally offer [this kind of] service for hire, he was taken by Gordon's intelligence and technical skill, not to mention his undying obsession with both LEGO building and the Yanks. Unfortunately, Gordon's demanding school schedule has gotten in the way of completion, and Kenney expects it will be another year before the project is finished: "During the summer we were able to do two four-hour sessions a week, but with school in session, we only get two two-hour sessions. Hopefully we'll finish it before the original is gone."