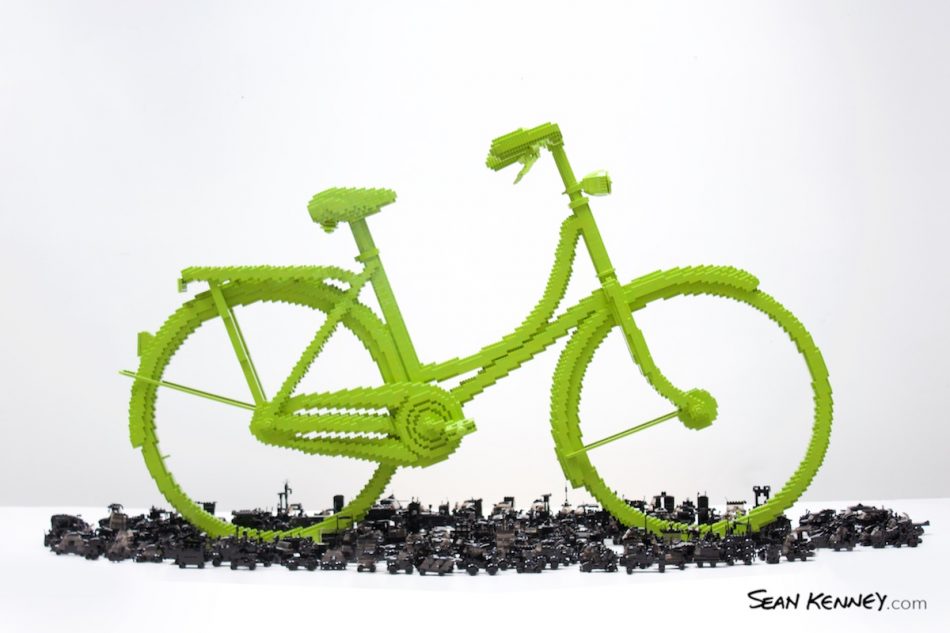 I love riding my bike because it doesn’t get stuck in traffic.  The traffic jam is built entirely with black LEGO pieces that represent smog and our carbon footprint.  The bicycle is eco-green, bright, and giant, symbolizing cycling as a the healthy, Earth-friendly alternative to motorized transportation.

Over the course of three days, thousands of kids built the world’s biggest, gnarliest, clogged-up, crazy traffic jam, while I created a life-size eco-green bicycle triumphing over it all. I love that this sculpture not only looks elegant, and not only has a great message behind it, but also that it features the inspiration and creativity of thousands of children.  I am proud to have created this. I live in Amsterdam, the Netherlands, and prior to that lived in New York City.  I ride my bike every day to get around town.  I don’t have a car and I advocate for reducing traffic and making the streets safer and more enjoyable for everyone.

One morning as I was riding my bike from my home in Midtown Manhattan to my LEGO studio, I noticed that all the cars on the road were completely clogged in traffic in both directions, as far as I could see, traffic was completely stopped.  As I quietly, smoothly zipped past everyone in the bike lane, I realized, “I love riding my bike, because it doesn’t get stuck in traffic!”And I immediately had the vision for this sculpture: A life-size bicycle, towering over a clogged up crazy traffic jam built by kids. The original version of this sculpture (built in 2011) was built at the Brickmagic LEGO fan event in Raleigh NC.  Over the course of two days, thousands of kids (and adults!) built the world’s biggest, gnarliest clogged up, crazy traffic jam using over 75,000 black LEGO pieces, while I created a life-size eco-green bicycle triumphing over it all.

The sculpture was never meant to travel, but quickly became one of my most oft-requested pieces to display at art museums and exhibitions.  In 2019 I decided to completely rebuild and update the sculpture.  My team and I glued together all of the children’s cars and completely rebuilt the bicycle to better handle the rigors of transport and public display.  And since I was in the process of moving to Amsterdam, I decided to model the bicycle after a classic Dutch omafiets (“grandma bike”), which is a quintessential icon of urban cycling. The entire sculpture is built on a slanted angle (see above) so that stacks of LEGO bricks better align with the lines of the bicycle.  A laser-cut internal frame composed of acrylic and aluminum runs through the entire sculpture giving it rigidity. I believe in working within the rules of the LEGO system.  It’s important to me that everything I create is actually buildable with LEGO bricks in the way they were designed to be used.  I do not “cheat” parts into place by just gluing them in place or screwing them to an internal structure.  Of course, I still need to glue every piece together, use clamps and grips, and run metal through the sculptures so that they can survive truck transport and public display. But I want the end result of every sculpture to be something true to the LEGO medium, and done in a way that you might never know what was hiding inside. The wheels of the bicycle are intentionally free of spokes, to make it look like the wheels are spinning. (below)